We stay on the Cotentin Peninsula for this stage, riding up the west coast this time, just past a few of the estuaries and wetlands that we passed yesterday on the way up from Mont Saint-Michel. We didn’t get as many dramatic views of these as the race passed through the small country roads of Cotentin today, so I’d like to discuss the large body of water sometimes visible off in the background the last couple of days, la Manche, the English Channel. Where does the water in the channel come from, and where does it go? Why are the tides so high at Mont Saint-Michel? Who would win in a race between Peter Sagan and the tides of the English Channel?

The English Channel connects the North Sea to the Atlantic Ocean from the Straits of Dover in the East to the line connecting Land’s End in Cornwall to Ushant in Brittany. The deepest part of the channel is in Hurd’s Deep — number 7 on this map from Mellett et al. (2013). The eastern end of the Channel is much shallower than the western end. Much of the eastern part of the Channel and the southern North Sea used to be a land bridge from Europe to Great Britain called Doggerland, but that’s probably a topic for next year’s Tour starting out in the Rhineland of Germany. Evidence has been accumulating recently that the Channel is the result of a catastrophic megaflood that erupted from a glacial lake in Doggerland (Gupta 2007, Collier 2015).

The tides in the English Channel are amplified as water is funneled into the many bays along the channel, rising highest in the Bay of Mont Saint-Michel, as we saw yesterday, and near the mouth of the River Somme in the east (Pingree 1980).

The highest velocities in the channel are at the tip of the Cotentin peninsula at La Hague, near where we finished today’s stage in Cherbourg. The peninsula squeezes the water between France and Britain there, forcing water to rush past La Hague. As this high velocity stream passes through the Channel, it dissipates energy by friction on the sea floor, and more energy is dissipated in the Channel by this mechanism than is dissipated in the entire North Sea (Pingree 1980)!

When we average the flow over a complete tidal cycle, it’s possible that not all of the water which comes into the Channel with the flood tide leaves on the ebb tide. This is called residual circulation, and in the English channel a residual circulation carries water from the Atlantic through the Channel to the North Sea. We can measure this circulation with radar coupled to hydrodynamic models (Sentchev et al. 2006) or with radioisotopes released into the Channel by the nuclear waste processing facility on La Hague (Bailly du Bois et al. 1995).

A thrilling finish today by Peter Sagan just down the road from La Hague. The tidal velocities at La Hague reach up to 15 or 16 kilometers per hour. Peter Sagan was pushing 60 to 70 kilometers per hour during parts of the race today, handily out-cycling the tides. The Channel has him beat on power though, dissipating around 60 gigawatts. Sagan averaged a little over 200 watts today, pushing it up to a kilowatt or so on that last climb, so it’s probably more reliable to get the Channel to power your home, if a little less fun.

I’ll leave you today with a painting by Eduoard Manet of another famous event to happen off Cherbourg: the sinking of the CSS Alabama by the USS Kearsarge in 1864. 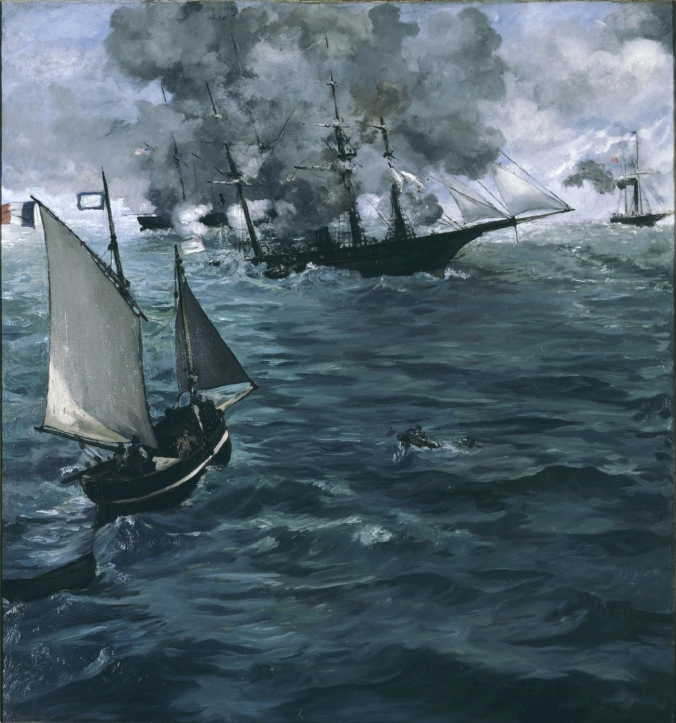 One thought on “Stage 2: Saint-Lô to Cherbourg-en-Cotentin”